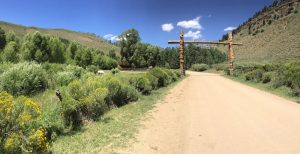 The road to Drowsy Water Ranch isn’t paved.  To get here, you turn north off Highway 40 onto County Road 219 and, almost immediately, you can say goodbye to the smooth, modern driving surfaces of asphalt or concrete.  Get ready for the dust to start flying, for bumps in the road, and for the occasional section of washboard.  You might as well kiss your clean car goodbye, too.  Ranch-bound vehicles stay clean for approximately 5.2 seconds before the dust and occasional mud puddle makes its mark.
Okay, okay, so it might not be the driveway you’d wish for all the time.  But life on a dirt road (even if it’s a life you only get to have for a week at a time) is a great slice of life to experience.   A lot happens at the end of this dirt road that can’t and won’t happen at the end of any paved road. 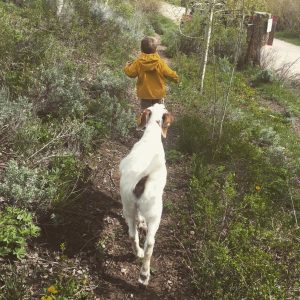 For one, the fact that you’re on a dirt road usually means you’re on a path less-traveled.  You’re not going to end up at a crowded, noisy, main-attraction kinda joint when you take this road.  Nope, you can feel confident you’re living a life more adventurous than that.  You’ll be up-close and personal with nature because that is exactly where the road leads: to the backcountry of Colorado’s Rocky Mountains.  And, sure, they’ll be a few people around, but not so many you can’t learn everyone’s first name.  You’ll also know that you will have plenty of time and space at the end of this road to get back in touch with the people traveling over the bumps and potholes with you in your car, too.  Life on this dirt road doesn’t lend itself to much time with technology (not great cell service always and not a T.V. to be found).  Here, we spend a lot of time just talking to pass the time. 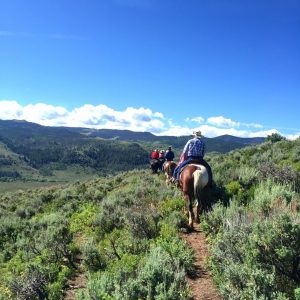 Second, like your car, you probably won’t stay real clean real long when you live here.  But that is okay.  Something inside kinda sings when you end your day with a nice, hot shower, and, you know what you see in the shower?
Dirt!
Yessiree, at the end of the day you actually need to take a shower because you’re dirty, not simply because you’ve reached the allotted amount of time between showers deemed socially acceptable even though you’re still actually clean.  Somehow, seeing this visual evidence of actual dirt flow down the drain is exhilarating because maybe, just maybe, you were actually close enough to the mountains, the animals, and the trees that those things left some of THEM on YOU.  You actually have some of their dirt on you to prove it. 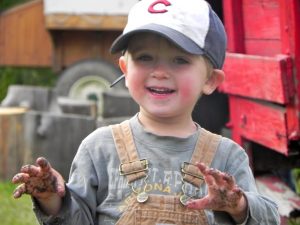 And you think it’s fun for you to need a bath due to actual, honest-to-goodness, dirt?  Wait until you see how cool it is for the kids to need one of those too (for the same reason, but usually to a whole different degree).  With most kids, the chance to get genuinely dirty is, sadly, not something that presents itself every day.  Kids these days don’t often get to play in a creek or hike up a mountainside, they don’t get to collect chicken eggs or ride a horse through the woods.  Here, at the end of this dirt road, you better bet they get to do all of that and more.  With ranch life, childhood math is pretty simple.  The easiest formula is one that goes like this:
DIRT=FUN
See? Simple.
You could get really complex and say that the “dirt” side of the equation and the “fun” side of the equation increase together proportionally as well so maybe it looks like this:
DIRT=FUN
You get the point.  If your kids come “home” to the cabin in the evening covered head-to-toe in the dirt, you can assume that they probably just had the best day of their life. 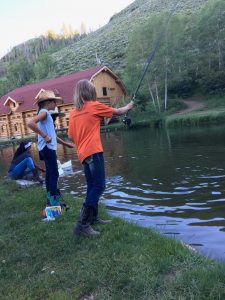 We hope all this talk of dirt isn’t freaking you out.  You might come from pristine, concrete surroundings and this is really starting to make you twitch a little bit (“Get me the hand-san, honey!”).   As one of my favorite sayings goes,
“God made dirt and dirt don’t hurt.”
Whether you believe the higher being has anything to do with dirt or not, just try to ignore the red-neck grammar of that statement and get to its meaning.
Know that most all dirt is painless and it washes off or out of anyone or anything you care about and might want to see clean again.  Life after living at the end of a dirt road can return to pre-dirt road standards of dirt-free-ness if you’d like.  All you’ll need is a little bit of soap and water (and maybe a washing machine with a “heavy-duty” cycle).
Kacey Underwood2018-12-03T17:07:54+00:00
Page load link